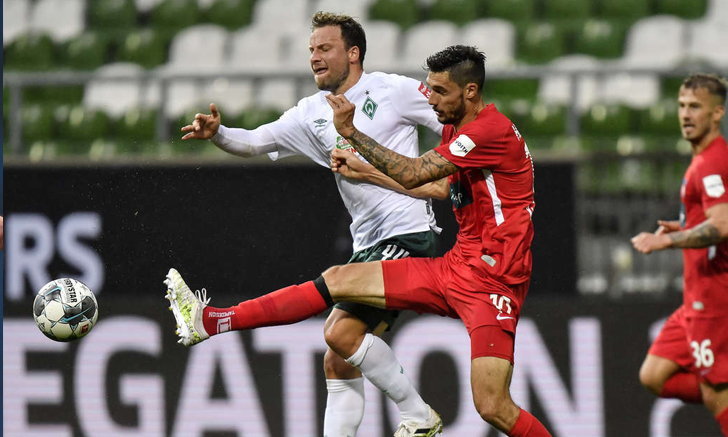 "Seagull", this big boss, Florian Kohfeld, organize a full force The offensive line has the protagonist "Milot Rachcha" leading the net to lead the victory.

The away team, Heidenheim, ranked 3rd from the lucky second league to win the playoff final. When competitors compete for this ticket, Hamburg also loses the game. Frank Schmidt, the visiting team trainer Hope to create a surprise attack to gain an advantage first for the opportunity to crush the top league football for the first time, send "Tim Klein Dean's" pioneered the goal.

The results show that the first half doesn't have a thrilling rhythm. Both have the opportunity to shoot only 3 times on each side, which does not get into the frame even once. As for possession of the ball, Bremen performed well when they held 71 percent, while Heidenheim 29 percent.

Back in the second half with heavy rain. Causing the players of both teams to play mostly in the air While also slipping and falling like playing

Until the game arrived at the 78th minute, Bremen hit the goal upwards from Yuya Osako's hovering stroke but still not in the frame as usual.

The first rhythm of the game has arrived. Which occurred in the 83rd minute by Kevin Mueller as the visiting team boss Falling to get a shot from the midfielder of the 33-year-old midfielder of Bremen. After 2 minutes, the captain of the new class Moy Sander, the Seagull came second and became the red card. Fired Causing the home team to have only 10 players left