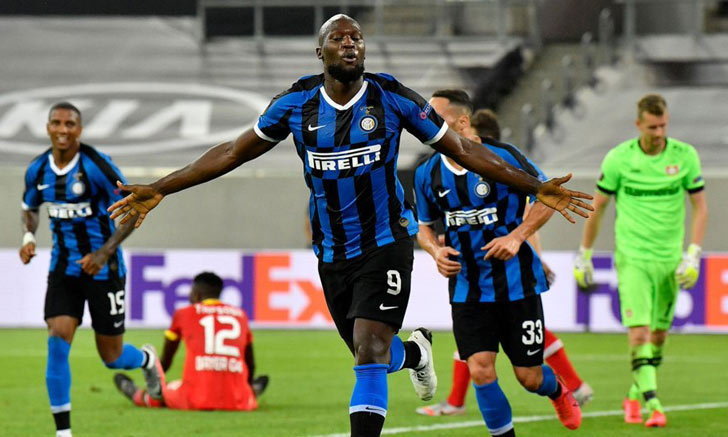 Competition Football UEFA Europa League round of the last eight teams, a knock-out system. At Feltins Arena, Germany, during the "Big Snake" Inter Milan, a famous team from Macaroni, met with "Drugstore" Bayer Leverkusen in the Bundesliga battle .

The results showed that the game started 15 minutes. Inter led 1-0 before Romelu Lukaku turned a shot in the penalty area blocked. The ball bounced into Nicolo Barella, composed one stroke before flicking right from the front of the penalty area, sending the ball into the far post.

Six minutes later, Inter moved to 2-0. Ashley continued to pass the ball from the left, pushing it into the penalty box, allowing Lukaku to cover it and knocking it over on the left.

The drug store is going 2-1 in the 24th minute, Kai Havertz will hook the ball into the penalty area, but the inter-ball player bounced into the leg, Kevin Folland bounced back to Havertz. With the right to not miss the last 20 minutes of the first half, there were no more goals, finishing 45 minutes, Inter led Leverkusen 2-1.

An hour pass Both teams had another chance, Inter had a chance to win from Christian Eriksen, who beat in front of the penalty area to save, while Lever had also tried far from Kerem Demir, but still failed to pass Samia's hand. Rhandanovic

At the end of the game, in the 89th minute, Karim Bellarabi, a spare tire shopper to foul Christian Eriksen, fell into the penalty area. Judge of the Czech Republic And not to be a penalty again Because the ball hit the hand of Barella first

However, the remainder of Leverkusen scored no additional goals, resulting in Inter Milan's 2-1 win over the semi-finals. Go to wait to meet the winning team between Shakhtar Donetsk or FC Basel that will compete tonight (11 Aug) at 2:00 AM.