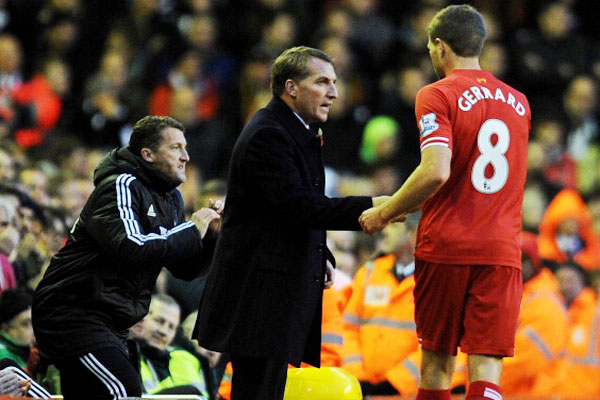 April 27, 2014 was a painful day for Steven Gerrard and "The Kop" disciples because it was the day that dreams of winning the long-awaited English Premier League from the defeat. Chelsea, Anfield, at the 2013/2014 season.Going back 6 years ago, Liverpool, under the bridle of Brendan Rodgers, is outstanding, especially for the attacking game where the rival's goal scored. And misspelled the loss of 16 matches in the league by winning 11 straight games, one of which was a match to beat Manchester City 3-2, resulting in them leading "The Blues" 5 points and only 3 games left to play At that time "Reds" only needed 7 points from the last 3 games was enough to allow them to fulfill what has been waiting for over 2 decades (at that time) and opening the field Anfield to handle Chelsea. It's not a difficult job since the visiting team has no hope of winning While also resting many key players Of course, Jose Mourinho led the army "Indigo Lions" to visit "The Reds" with a double-decker bus that is non-invasive play, but does not fill up until ugly. Just waiting on the mistakes of competitors. And then seize it enough Playing with endurance without pressure, in contrast to Liverpool, who feel themselves pressured by trying to launch an attack game to win in the style of "B-Rod", in which they can really emphasize this game. But should not be careless Because the draw is still considered safe to win the championship The situation is at hand. "Reds" have always dominated the game. But could not pass the ball into the net of the visiting team And in the first half injury time, Gerrard may lose concentration or whatever. Push the ball off the foot And trying to turn back to get the ball but the pressure slipped, resulting in Demba Baba slipping into the ball through the hand, Sim Mignolet tucked in the bottom of the net. Actually, if the score ends 0-0 in the first half, Rodgers is expected to place new pieces to destroy Mourinho's 2 buses, but having to fall back to 1-0 in injury time Everything goes through "Elder Mu", which is well-known as the godfather of tactics.As expected in the second half, Chelsea almost did not have to do anything, just defensive and waiting to return. Which worked when they hit the coffin door from the coordination of William, whose home defeat in front of the disciples "The Kop" 2-0. It is what destroys everything. In addition, their heroes have contributed to the defeat. The more the pain grew After the game missed Chelsea, Liverpool still scored unbelievably in the following game, when they broke only "The Eagles" 3-3, although they scored a 3-0 lead. But the home team scored 3 goals in the last 10 minutes